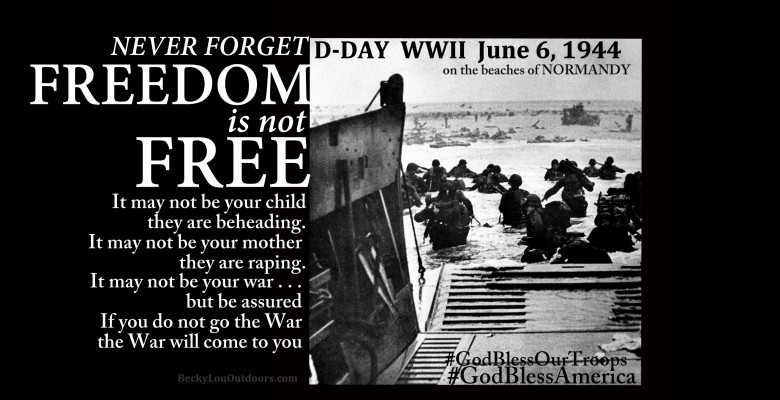 It is chilling as I try to imagine the fear in the hearts of the soldiers as they pushed through the tides of the Beach of Normandy, toward the enemy and almost certain death. Their courage and bravery on this small section of beach half way across the world, was the final straw that broke the hold the Nazi’s had on several countries, and truly the world. Our final involvement in this war, with combined forces of our allies secured our freedom here at home for our families. We waited on the sidelines until the evil drew us in, which was almost too late. This war was truly won by the sheer might and will of every single American man, woman and child here and abroad. The entire nation had to be involved and give 100%. It’s scary to think about it even now. Did we wait too long to get involved? As I understand it, our government wanted to stay out of a fight they felt was not ours. History has proven that it does not work like that, and it never will.

The United States, initially not wanting to get involved was finally forced to join the fight. Ultimately the US became the uniting factor and the driving force behind the war, and specifically the D-Day operations which was the first step in effectively halting the growing Nazi reign of terror on the world. Other countries were fighting with all their will all their might, but they were all doomed without the commitment of America. We had to take the wheel on this War!

This is all too similar to what is going on at this very minute across the world. The administration is doing the same, and History appears to be repeating itself.

When there are atrocities being committed in other parts of the world, we cannot turn a blind eye. We are the strongest country in the world (for now)  and we have always been the one to rally http://tadalafiltablets.net support for and lead allied forces into battle, wherever it may be, to ultimately protect not only our freedom, but the freedom for all. So many countries are under brutal attack right now. 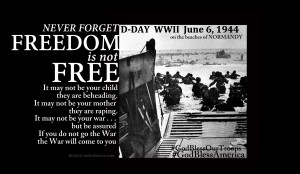 It may not be your children they are beheading..

It may not be your mother they are raping

It may not be your war right now, but rest assured

If you do not go to the War, The War will come to You

I feel that their war is our war. Just as history has proven, the people committing these crimes toward innocent people just for  a desire of power, will not be satisfied with one country, or two countries… they want it ALL! And all of their sites are set on the United States!!If you do not want the US in another war, I understand that you don’t like to see people hurt, but unless we GO to the WAR abroad, the WAR will come to us.

So, if not the U.S.to take the first step, rally the allies and lead the battle, then WHO? If we continue to reduce our military, negotiate sanctions, and alienate our strongest allies, it’s only a matter of time before someone will slip in and fill the void of a “World Leader”.

World War II was so long ago, and without refreshers people will forget Why the war started and How it ended. Without it they cannot understand what has to be done to stop History from repeating itself. It so important to educate yourself with documentaries, visit the museums, take your children and your grandchildren. Teach them that

FREEDOM is not FREE

Help us through this weak scandalous administration and give us a leader/president that loves God, America and reinstate our status in the world as one Nation, Under God, with Liberty and Justice for all.

See these Great links, show them to your kids and grandkids ~~

Women in the Wilderness of ...