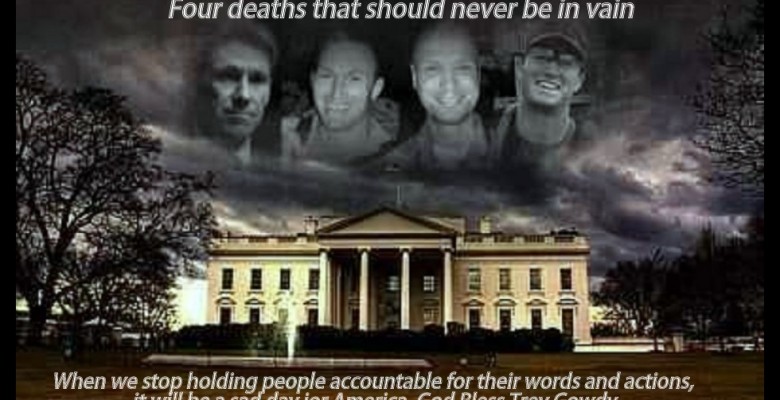 Finally THE TRUTH on Benghazi, Syria

I normally do not post politically controversial subjects on my website, but actually this is neither political or controversial.  The administration ( namely Barack Hussein Obama, Hillary Clinton and Susan Rice) have attempted to cover their tracks and pervert this horrible tragedy into a political controversy… but Facts are Facts and the Truth will prevail.  Although this information is accessible everywhere, it is heavy on my heart and I cannot sit back an say nothing. We have a presidential election on the horizon. I have a few things to say about some of the latest brazen Lies told my many that we are supposed to trust,  one of which is running for PRESIDENT, and I just can’t stand by and say and do nothing. We can never stop seeking the truth and holding people accountable for their words and actions, which is exactly what some people want us to do. God Help us All.

TRUTH about the #Benghazi murders in Syria— The DIA report given to #Obama #HillaryClinton just a few DAYS AFTER THE ATTACK debunks EVERYTHING the president and all his cronies were saying!! Please think back on the statements / rhetoric / lies / propaganda coming from #SusanRice #Barack Hussein Obama #HillaryClinton, Whitehouse spokesperson, when they had this report after an intense investigation —

Within a few days The Obama Administration’s own Department of Intelligence Agency concluded that:

“At this point it DOES MATTER”

NOTE: Do not think for one moment that Obama, Susan Rice, Hillary Clinton or the Administration decided to come clean and give us the truth. The only reason these documents are made public is because the credible “watch-dog” organization JUDICIAL WATCH took the effort and made the financial sacrifice to SUE the Administration in FEDERAL COURT for the documents. The White House was forced by the law to turn over these records. (A law that I am sure Obama is trying to change as we speak!)

Your SKIN should be CRAWLING! These documents are proof positive that it was all BS!! They were all purposely and methodically trying to cover their tracks and pass the buck to a poor American that made a YouTube video. They repeatedly called it a COINCIDENCE that the attack happened on September 11! I don’t know how they can sleep at night? They were clearly appealing to the masses of ignorant sheep that voted and would STILL vote for them! As for me, just like most everything that comes out of the White House these days, I did not believe it for a second!

When did so many people quit thinking for themselves, trusting their own intuition, trusting in God?!

Also, more in depth documents from the administration’s OWN department of Intelligence proves that Obama was LYING when he said the rise of ISIS was a surprise to the Administration. They knew months in advance that US Intelligence Agencies were fully aware that the TERRORISTS in Libya were moving weapons to Syria (Benghazi) weeks before the attack that killed the 4 Americans. Who had requested and pleaded for more security. How very very sad. What message does this send to our military? We depend on their loyalty and courage. They draw from the respect and honor that we give to them for courage and strength to endure the horrible circumstances. I know that they form a unity and go into battle knowing that they will stand by each other and fight to the death to protect their fellowman. They don’t feel support when they see their fellowman thrown to the dogs, and the truth to be perverted. Making it seem that will not be left behind

I am starting to think that Obama is on their side! What would make me think differently!? Muslims are allowed to lie to Infidels, for the progress of Islam and the conversion or KILLING of other faiths.. Whatever Obama does that appears to be NON-Islamic is just a show and a fake front. I believe that with all my heart.

“Now we know the Obama White House’s chief concern about the Benghazi attack was making sure that President Obama looked good,” said Judicial Watch President Tom Fitton. “And these documents undermine the Obama administration’s narrative that it thought the Benghazi attack had something to do with protests or an Internet video.  Given the explosive material in these documents, it is no surprise that we had to go to federal court to pry them loose from the Obama State Department.” –Tom Fitton of Judicial Watch

This is the worst Administration for NO TRANSPARENCY and repeated LIES and misinformation! You can’t call me a racist because Hillary is at the top of the list! Please share and take the time to encourage people to vote. Despite all the voter fraud, I truly believe that if every single person and patriot in the United States would get out and vote in EVERY election, from local to Federal level, we would have the change we need and want. We are all busy, and more so now than ever given the scandal after debacle after distraction that comes out of the White House, but My heart is in it for this next election. Nobody is perfect, and there are many GOP candidates that are decent and have the same values with a reputation that I can respect. Pick one and let the primaries decide. If your chosen candidate does not win in the primaries, they will throw their support behind someone who they believe in. If you would trust the presidency to them, why would you know trust them for leading you to the best candidate out of all the candidates!? Don’t stop caring if your candidate does not win. Re-evaluate and stay connected. The most important election is only every 4 years. You can make the effort for your and your children’s future. I am begging each and every one of you, be a part of the change that we need for 2016 elections, it is never to early to start.

Great resource for staying informed on all candidates everywhere for every election: www.canivote.org

Links to information during and shortly after the attack:

News Report shortly after Please watch. Someone was viewing Real time video during the attack –  Benghazi “Stand Down Orders” September 11, 2012

More links with the latest information:

FOX NEWS is only major news station that make the effort to bring both sides to the table. They have people on deck that are consistently consulted that do not hesitate to SPIN and PERVERT the TRUTH. You can’t get better at twisting the truth than the FOX regulars #StephenSigmund #AlanColmes #JuanWilliams and as far as I’m concerned even #KirstenPowers, although she can be considered close to “fair” in a few interviews/debates I have seen…

JUDICIAL WATCH info on BENGHAZI May 2015