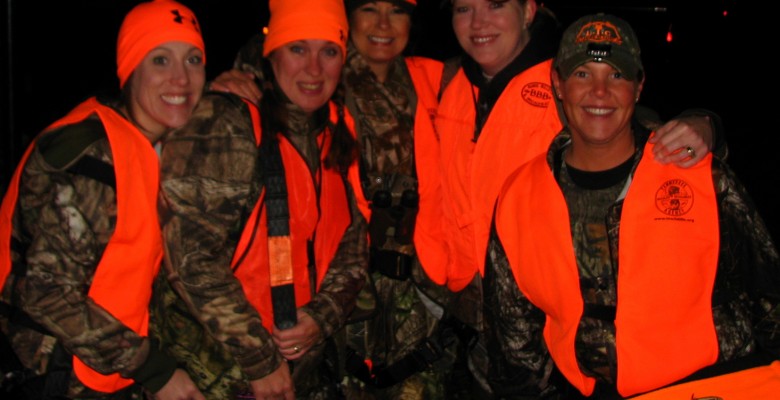 Let’s hear it from the GIRLS!

I just have 2 words to say to women in the outdoors about writing down your stories & sharing your experiences….

DO IT!!
Why is it a passion of mine is to encourage everyone to support women in the outdoors? Short Story long…. as most of you know, I have only been huntin’ & shootin’ things since 2000. A few facts noted– without a weekend workshop for B.O.W. in Louisiana, and my husband’s encouragement, it may never have happened. I know first hand that it takes information, encouragement, and inspiration for anyone to step outside of their comfort zone and try something new. I was lucky enough to have all three. I now strive to make those available. It may not be for every girl, but I am thankful that I had the chance to decide it was for ME! As I always say about shooting, “You may like it, or you may not, but I‘m here to tell you, it’s worth a SHOT!”
I am going to appeal to you girls out there that have already taken the leap of faith into the outdoors, be it hiking; 4 wheeling; fishing; camping; shooting; hunting, etc …. you are outdoors breathing that fresh air, loving life, and it is only fair that you take the time to share, inform, and inspire!
There are many ways to tell your tale, review a product, share a tip or show your trick. You may develop your own website; submit to newsletters; a few outdoor websites may approve a story, and there are other social platforms available. It is important to remember that it is not only important to write it, you want people to be able to find it and read it! So in addition to what you are doing now, I personally want to recommend and enlighten you about OutdoorHub.com. This website is on track to be the online information HUB, linking all aspects of outdoor information and products across the world. I know the history of, and capabilities of one of the founders in this organization and have every confidence that the company will live up to their name and goal to be the main HUB for the best in resources for outdoor information, services and products! Only months into action, they are already becoming one of the more respected and appreciated leaders in their field.
Outdoor Hub is actively seeking Real Stories from Real People in various sports, with different platforms to offer, they will talk to you and decide where your words belong! They are currently providing news, photos, how to’s, stories, etc to over 12,000,000 and with funneled internet traffic, this will help people find and actually read your story and you can link back to your own website from there! Thankfully they realize that not everyone is a professional writer and have developed carefully written guidelines that have been a tremendous help to me in my efforts to blog, write, and just share in general. Just ask and they are yours. (email:content@outdoorhub.com). These are great people, a wonderful organization, and I am sure that once you begin working with them, you will totally agree. I say these things wholeheartedly and without reservation. Please contact me and I will give you all the direct contact info.
I am sincerely hoping that this information has encouraged and inspired you to begin sharing your stories somewhere…. ANYWHERE!
Looking forward to talking to you!
“Camo can be Classy”